New and good this weekend:

1. Celebrated anniversary with my spouse at the One World Buffet. We initially went there because Google told us that it had multi ethnic food such as Mexican!
When we arrived, we were stricken with awe at the huge murals of Mexico, China and Greece.
So we sat down, our waiter came and invited us to go help ourselves.
Well, at first glance the food was really really SAD. I mean, standard American diet: SAD. There were French fries, pasta and sauce that seemed to come straight from a can, frozen pizza… For the longest time I couldn’t figure what was actually Mexican.
I politely returned to my seat and let Husband go up. I watched him look at the food. I was thinking he would come back to the table and suggest we just leave… It was 26.99 a head, and the food was certainly not worth it.
Well, he started gathering things on a plate. I breathed a sigh if relief. I would just  relax and make the best of it.
It was the company and atmosphere that would be most important. The waiter was fantastic, and the place was pretty nice. Some if the SAD food was even tasty… But ate too much, an put my body into distress.
Finally getting rid of the food from my body today.
2. Made lots of food on Sunday for the whole week.
3. My mom came over and helped me dig up the sunchokes from the garden. 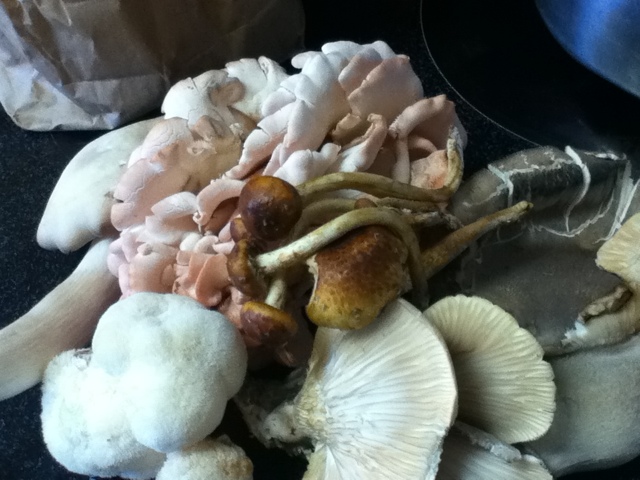 Looking forward to detoxing and taking care of my body.
Can anyone guess what’s in the photo above?
Cheers and rainbows,
Kim
Spread the Word!




